In 1899, a coal mine was opened on Fredonia Mountain overlooking Dunlap, Tennessee. For the next quarter century, the mining operations grew into an industrial complex that contributed greatly to the thriving economy and evolving social structure of a small town.

Constructed at the base of the mountain was a series of “beehive” ovens, designed to turn coal into coke for use in the iron and steel foundries of nearby Chattanooga. The first 24 ovens and the company store were built in 1902. Then, in 1906, 144 ovens and a steam-powered coal washer were constructed. In 1916 a new railroad up Little Brush Creek created the demand for more coke production. Along with a one million dollar coal washer, 100 more beehive coke ovens were built on the east end of the site. These last ovens and the coal washer were used very little due to the company filing for bankruptcy in the mid-1920’s. A total of 268 stone ovens had been built when, in 1927, the mining operations were shut down due to falling coal prices and the onset of the Depression.

The coke ovens lay dormant for more than 50 years, exposed to the ravages of nature, garbage dumpers and rock thieves who dismantled stone from the ovens. In the mid-1980’s local citizens formed a historical group and began efforts to clear away the debris; soon a historical Today the ruins of the once thriving complex cover most of the 62-acre park. The property was donated, for preservation, to the Historical Association by Bowater Southern Paper Company. The sandstone and brick walls of the ovens still stand much as they looked when masons built them. Excavation work continues to uncover more of the ovens. The park has been placed on the National Register of Historic Places, and it is maintained by the Coke Ovens Museum Association and The Sequatchie Valley Historical Association volunteers. 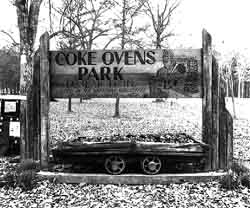 What to learn more? Try these topics.